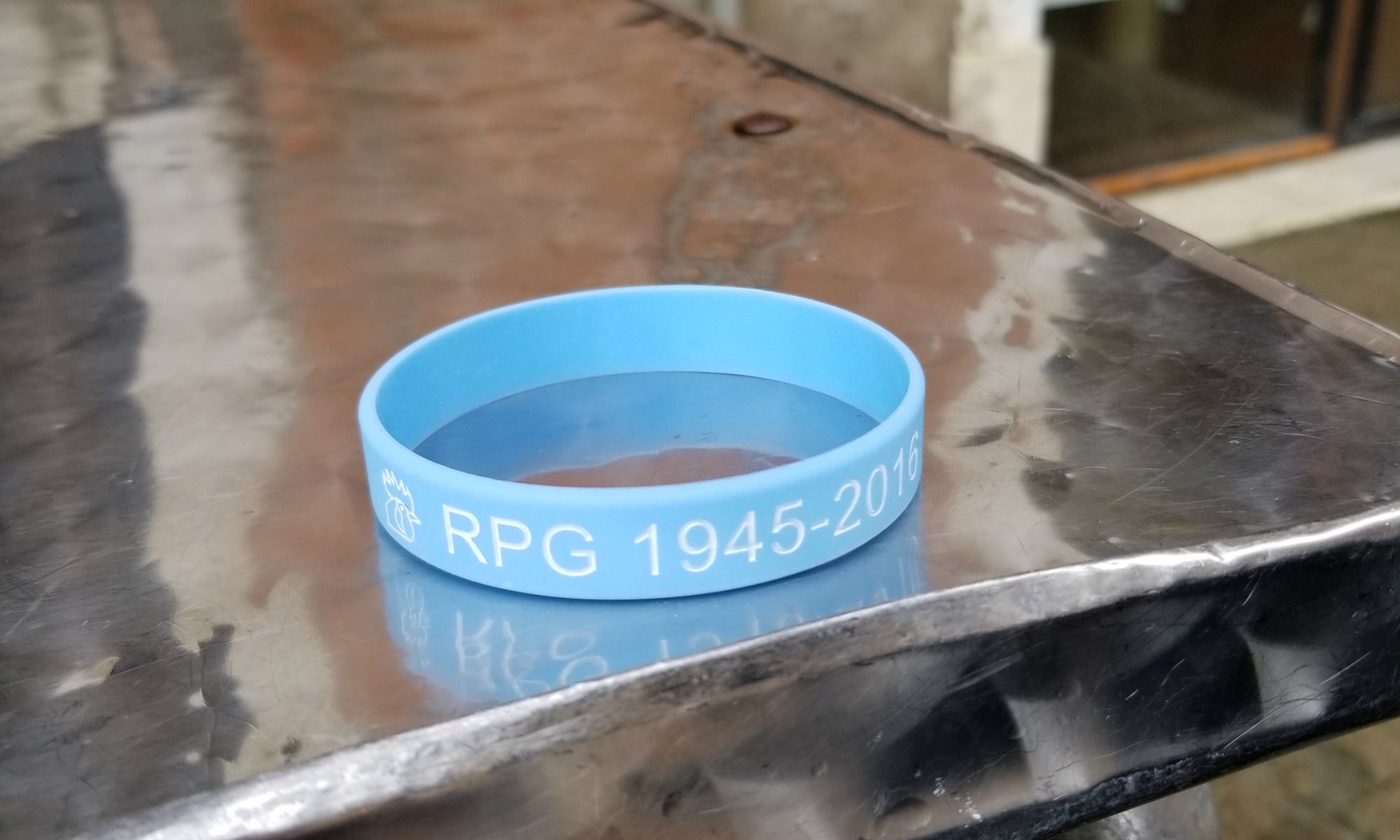 (This was written March 22)

I’ve been thinking a lot about my dad.

It makes sense: the anniversary of his death was less than a month ago. But the strangest thing about my father’s passing is how long it took to affect me.

Maybe it’s the softness that develops with old age. Since I’m now an ancient 33 years old (the same age Jesus was when he was crucified), I’ve definitely started getting sappier. Like, cry-during-a-pasta-commercial sappy. OK, so that hasn’t actually happened, but there are a variety of situations that will result in tears now.

For instance: leaving my girlfriend? Devastating. And I wasn’t even leaving her as in a “breakup.” No, we merely parted ways for 12 days. But if you’d witnessed my tearful goodbye, you’d swear she was going to spend the semester abroad.

(Natalie, if you spend a semester abroad, I’m going to be so mad).

And movies? Forget it. The end of Forrest Gump makes me bawl my eyes out, for crying out loud.

Along with that softness has come a new longing for my father. I miss him, and I find myself thinking about him more and more. It’s not an aching pain or a deep sadness; more of a melancholy.

Because I have a lot of perspective about my father’s death. He was a very old-school man who never went to the doctor, ate junk food, drank liters of Coca-Cola every day and smoked like a chimney. We are never sure how our stories are going to end, but my dad was always playing with fire. Eventually, I figured his lifestyle would catch up with him. I just hoped it was a decade from now.

But I brought up my age because that seems to be the biggest difference. As I grow older, I find myself feeling older. Let me explain.

When I was a kid, I loved playing with toys. Like the 90s child I was, I had an array of Teenage Mutant Ninja Turtle action figures. I even had the Technodrome! What a time to be alive.

And I also adored Legos, because WHO DOESN’T LIKE LEGOS???*

*parents don’t like Legos. I know parents hate Legos, because nothing hurts worse underneath your bare feet than a razor sharp Lego block.

Anyway, I’m not proud to admit that I played with those suckers well into my teens. And for a while, when I was about 14, I thought I would never stop. I figured I would always feel like a kid, and always want to play with Legos.

But a funny thing happened on the way to perpetual adolescence; I grew up. I found new things to capture my attention and my money; like video games, movies and girls. Boy, have I spent a lot of money on girls in my life.

And eventually, I stopped playing with my Legos. I stopped feeling like a kid and started pining for adulthood, like all numbskull teenagers. And once I stopped identifying with those teenagers, it was a wrap. My childhood was over.

That was many years ago, and I thought my growing up had concluded. But anyone who met me in my 20s knows that wasn’t the case. I could use a lot of words to describe 20-something Fernando, but mature isn’t one of them.

I was a punk. A selfish big-mouth who drank too much and didn’t concern himself with anything beyond his own satisfaction. There’s a famous quote from the pirate actor Errol Flynn, which described my philosophy well: “I intend to live the first half of my life; I don’t care about the rest.”

So that was my mantra. And for a while, it seemed like I would always be a manchild playing adult in this world.

Basically, I thought I would always be 24-years-old. I would always be young, and goofy, and playfully arrogant just to make pretty girls smile. That I would work to live, but spend my free time enjoying existence. It was lightweight hedonism.

And then – I got old. All of a sudden, I woke up one day and wondered why the music was so damn loud. I started getting really irritated at teenagers. And as I began to teach college, I realized that 24-year-old Fernando was fading. The first year I taught, in 2015, I looked at my students almost as peers (well, peers that had to do what I told them).

But in a couple of short years, as the effects of technology began to separate generations, they stopped being my peer group. I stopped identifying with their struggles and their concerns; instead, I became concerned about them. I began to feel a responsibility to them. To knock the phones out of their hands and teach them how to be better students, better adults and better people. And seriously, STOP LOOKING AT YOUR PHONES ALREADY.

Before I knew it had happened, I had left the peer group. I had become a 30-something who no longer identified with college kids. I had grown up once more.

Which brings me back to my dad. I understand him better than I ever have; and I identify with him. Being responsible for young lives is a challenge, and the answers aren’t always apparent. But it’s my responsibility now, just like it was his to watch over my sisters and I. And he did a phenomenal job of it. Was he perfect? No. But he tried hard. He provided for his family. And he worked like a dog to make sure we never needed a thing.

But mostly, I appreciate him more now. I appreciate the sacrifices and struggles he endured to give me the American Dream. I wear a tie to work and my clothes are never dirty when I get home. I have a house, a dog, a wonderful girlfriend (miss you, boo) and a job that gives me purpose. I don’t know what else a man could ask for.

And that’s the most important thing my dad taught me: how to be a man. Not in terms of spitting or cussing or being some kind of machista; none of those silly antiquated ideas of manhood. No, the lessons I took from him were all about the responsibility to others. A man is responsible for those he loves and handles his business. He does his job without concern for thanks because that’s what a man is supposed to be: a provider. A champion. A rock. A lighthouse that’s never dark and always shining through the mist.

Whenever it’s hard to do that (and there are plenty of those times), I think of him. I think of his unwavering responsibility. Of his unflinching ability to make sure we had what we needed.

But mostly, I just wish I could talk to him. About anything at all. I hope one day I’ll still get the chance.

I went to Europe last week with Natalie, and it was an amazing trip full of a hundred little things I’ll never forget. In fact, I’m typing this on the airplane back from London: We’re still 4 hours from Oakland.

I thought so much about my dad, because he had always wanted to see Venice. He never made a serious effort to get out there, but money was tight for him after the Great Recession. And like many old men, he’d lost the desire to go places. He used to joke about becoming grumpy in his old age and liking it. I couldn’t even get him to come to a Kings or A’s game with me, to my great regret.

So when Natalie invited me to spend my Spring Break with her in Europe, Venice had to be on the list; in fact, it was the first place we visited. It is a beautiful, wondrous city. And I had to make sure that I remembered my dad while I was there.

Luckily, Europeans LOVE to put locks on bridges and other landmarks. And what do you know, one of those bridges was just a block from our hotel in Venezia. And I knew exactly whose name to put on it. 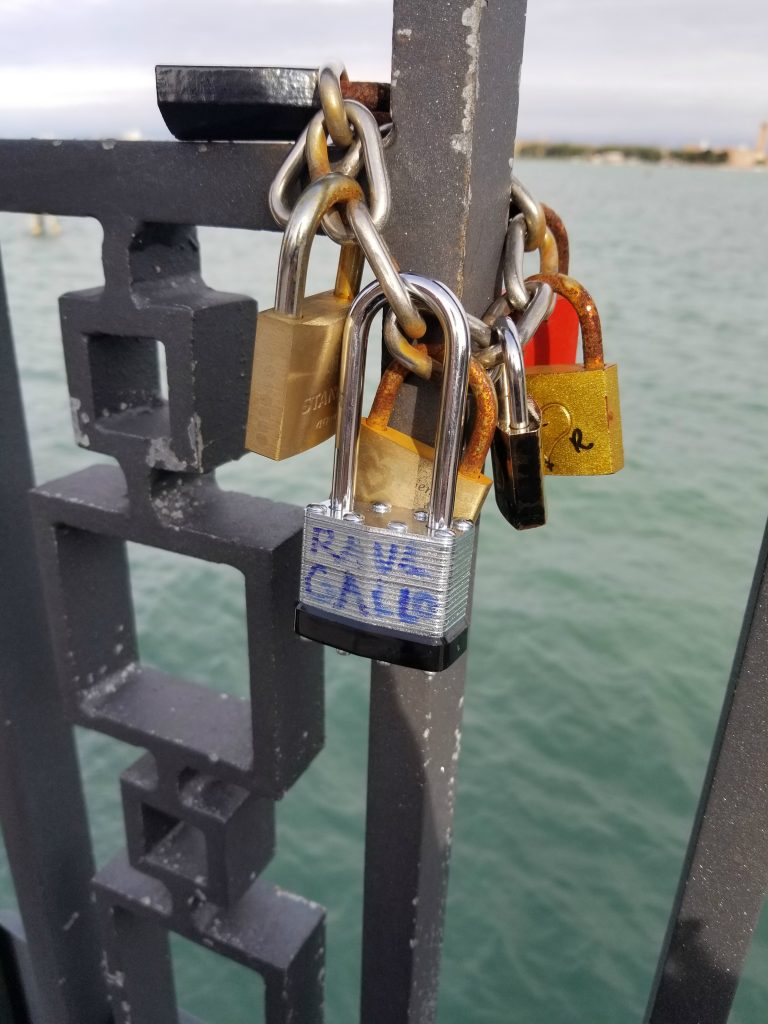 That was for you, dad. We made it to Venice.

One Reply to “A little about Venice; and a lot about my dad”